French Foliage with Stamp Off Technique

I hope that Labor Day weekend was as smooth for you as mine was. I was able to stay home, kick back and finish a project I have been working on. I also put in an order for a few supplies I needed and received a couple of other orders large enough to be their own workshops. Those are always fun.

I have also been working on a technique swap I joined, I need 41 samples and as I don’t think I could have done them all identical I switched my colors up a bit on some. When I get them all finished I will share a photo of them before mailing them off. I want to have them in the mail by the end of the week, although I have until the beginning of October to finish. 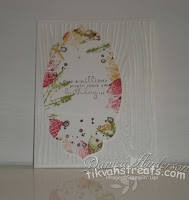 Today’s project was a card I made using the French Foliage and One in a Million stamp sets. I created this card for last month’s Stamp Camp. I wanted something clean and simple, yet using plenty of color. I really like the French Foliage set, it has versatility to it especially for use in fall or vintage projects. 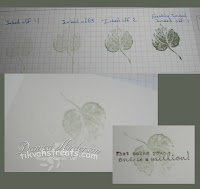 For the greeting I used the One in a Million set and on the inside just used the stamp in the set that says "that makes you one in a million!" you could make the inside a little fancier like I did on the inside of another of the same card. I took one of the leaf stamps from the french foliage inked it up and then stamped off on a piece of scrap paper to remove some of the ink. You may need to test this out a couple of times on scrap paper to see how light you want your image to appear. I then stamped my inside greeting over the top to add a little pizzazz to the card. Here is an example as to how I did this, I chose to stamp off two times as i like the look of the image a bit lighter than it would have been.


I hope you all enjoy!
DanicaA 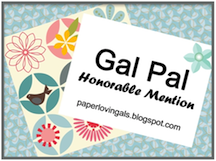